Windows 10 is the Beginning of the New World Order. The App development is totally revolutionized with launch of Windows 10.  Now one can develop an App that can run on all Windows Devices. Now an App will not build for the windows device or Operating System but for a version of UAP (Universal App Platform) and then UAP will take care of deploy your app in all the Windows devices. So! Welcome to One Windows Platform. The One Core Operating System, One Application Platform, One Gaming Social Network and One Store.

Now the Windows App Development is easier than ever before. By following some major key steps you can easily start developm;ent upon Windows. So to start development on Windows 10, first you must have to set your environment by follow these things;

i) You must have been on Windows 10 to build Universal Windows App for WINDOWS 10.

Windows 10 is the most exclusive and most stable Operating System so far. Part of the Windows NT family of operating systems.

ii) You must have to use any Edition of *Visual Studio 2015 to build Windows Universal Apps for Windows 10.

Microsoft Visual Studio 2015 is the most powerful tool for every developer and every app. A rich, integrated development environment for creating stunning apps for Windows, Android, and iOS, as well as modern web apps and cloud services.

If you have habit to use free or crack tools and you do not want to spend any money upon software, then congratulations Microsoft Visual Studio 2015 Community Edition is the most appropriate tool for you to do code. This is a free, fully-featured, and extensible IDE for creating modern applications for Windows, Android, and iOS, as well as web applications and cloud services. Visual Studio Community is free for individual developers, open source projects, academic research, education, and small professional teams with all relevant functionality which you required for development.

iii) Your Device which you are using for App development must have to be running software called Hyper-V (To Run Windows Emulators).

iv) You Need to Turn On the “Developer mode” of your Operating System. 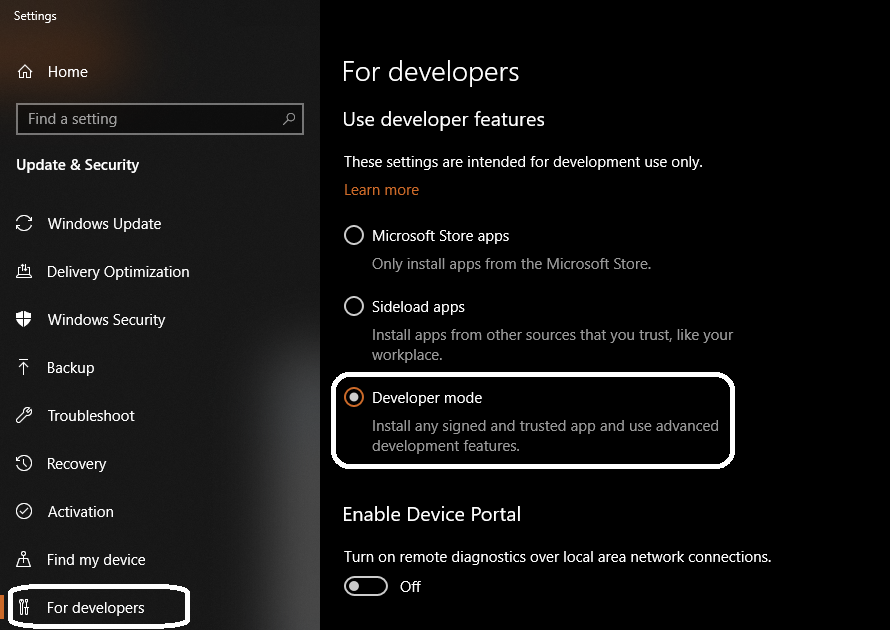 :: You can do this by going to ‘Setting -> Update & Security -> For developers’
So when all is set then congratulations, you are good to go to develop Universal Apps on Windows 10 that will run on all Windows Platforms.

Perhaps! You must have some basic knowledge of Programing and App Development to move forward.

The Navigation of UWP Apps is extremely cool and easier than other platforms. It allows enabling

During the Microsoft Build 2016 conference, Microsoft announced an awesome platform of Microsoft Int with Windows 10 Anniversary

The Navigation of UWP Apps is extremely cool and easier than other
The architecture of Universal Windows Platform is most exclusive with the center
Microsoft Windows 10 makes it easy for you to create a Universal
If you’re a .NET developer looking to create cross platform apps, Xamarin
Microsoft Visual Studio really supports you during the App development. It provides
Go to Top